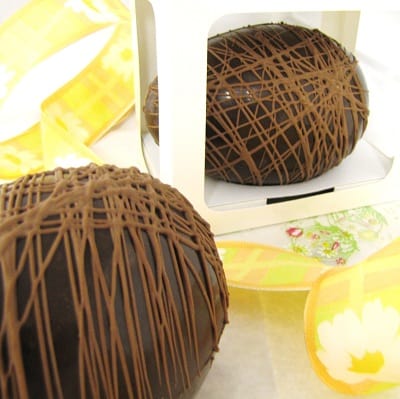 Easter is a time of renewal, rebirth and of course, really good chocolate. But why eggs? Aside from the obvious symbolism of an egg representing emerging life, there is a more practical reason why the Easter Egg is so ubiquitous this time of year. In early Christianity, eggs were forbidden during lent. Try telling that to a chicken. Since chickens didn’t follow church doctrine, they continued to lay an abundance of eggs during the six weeks of lent. In an effort to preserve them, the eggs were hard boiled so they would last until Easter. With such a bounty of hard boiled eggs, they were decorated, placed on top of bread or baked inside a meatloaf – all part of the Easter meal celebration. From there, it was suggested that cracking open the egg represented the empty tomb of Jesus, and often the eggs were colored red, the blood of Christ.

While Western Christians no longer follow this egg-free Lenten fast, it is alive and well in parts of Eastern Europe. It was only natural that the egg be morphed into a sweeter form, that being chocolate. This tradition dates back to the late 1800’s with Cadbury making a go of chocolate Easter eggs. The chocolate egg began to spread in popularity throughout Europe, with many other companies following suit in the early 1900’s.

Today, chocolate is as much a part of the Easter tradition and the egg itself. And since chocolate is the number one thing people give up during lent, it’s no surprise that we stockpile chocolate during those six weeks much like early Christians stockpiled eggs.