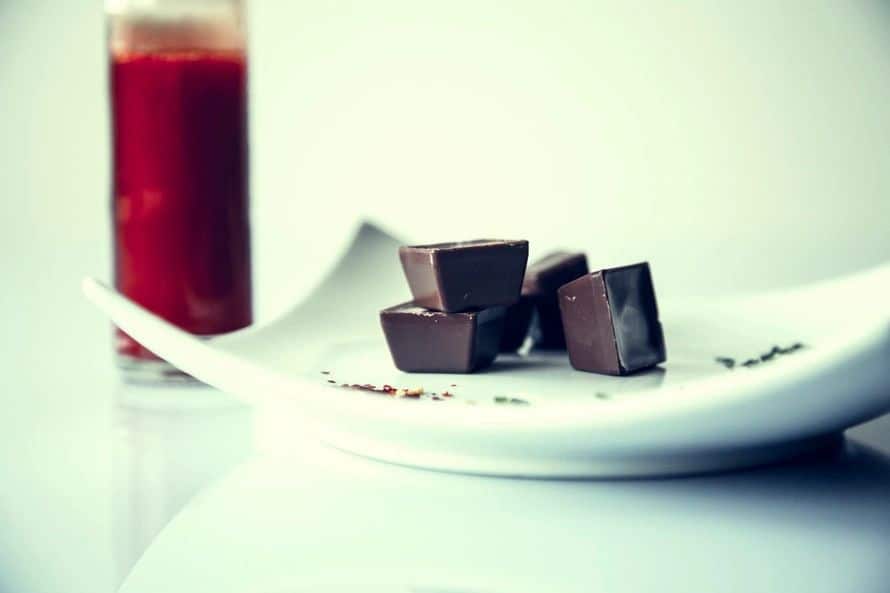 The quick answer to the question, “is chocolate addictive?” is: yes; humans can become addicted to anything.

In fact, there are different levels of addiction to define the intensity of one’s perseverance over a substance or pattern of some sort. The most well-known forms of addiction are drugs and alcohol, but anything from gambling, eating or even obsessive exercise can fall somewhere on the spectrum of mental illness. In no way are we comparing chocolate to drugs, but the science does show us that too much of anything, can cause dependency.

For a quarter of a century now, studies have been conducted on the correlation between obesity and different types of food. Over eating can be caused by a physical or mental problem, and also be diagnosed as an eating disorder. This often leads to negative consequences on the body, such as diabetes, heart disease and other problems one doesn’t usually consider. It can also take a toll on one’s mental health, which is where addiction plays in.

Obviously chocolate has its benefits (i.e. it tastes delicious and is good for you in small amounts), but even too much of a good thing isn’t healthy. Chocolate consists of cacao, fat and sugar – all ingredients that affect our nervous system. The chemical, dopamine, in our brain, causes us to feel a temporary “happy high” when triggered by certain activities or food. In processed foods with higher concentrations of these ingredients, such as soda, you may notice being in a hyper state for a while, which is our dopamine rising. This is followed by a “crash,” or feeling tired after the intense overload of chemicals in your nervous system exhausts your mental state.

The Yale Food Addiction Scale (YFAS), a program started by Yale University, studies the connection between people’s mental state and the foods they eat or the physical health they are in. According to a specific study by YFAS, chocolate is ranked as one of the most triggering foods in adults that struggle with obesity and/or binge eating. As for children, chocolate was found to be the number one most dangerous food for them to be around if they struggle with overeating.

Eating too much processed and unhealthy foods lead to physical problems such as Type II Diabetes, heart disease, clogged arteries, kidney failure, and more, and mental issues such as depression, anxiety and dependency. As delicious as it is, chocolate is included in foods that can lead to these problems if not eaten at a healthy pace.

Although these studies proved chocolate can fall into the category of “addictive,” it does not mean it’s dangerous. In fact, unlike medications, substances or more severe addictions, a dependency to certain foods can be easier to reverse with knowledge and a support system. Experts suggest if you’re craving chocolate while struggling with unhealthy eating, try going for a healthier version. For example, steer clear of big manufacturers that use fake ingredients and trans fats. Our chocolates at Barkeater are real chocolate, gluten free and contain no GMOs. Along with some of our barks that include nuts, flaxseed & fruit; we have some extra dark chocolates that are more delicious than what you’ll find in the candy aisle at Halloween. Dark chocolate is proven to have more health benefits due to the high percentage of natural cacao in it, so aim for a percentage over 60%. It won’t immediately help any food addictions you may be trying to overcome, but it’s definitely a start and once it becomes routine, will be a relief to your body.

If you are struggling from an eating disorder of any kind, you can call to talk or chat online with anyone on nationaleatingdisorders.org. For help with addictions, the SAMHSA has a 24/7 helpline that you can call at 1-800-662-4357, or contact your local Office of Addiction Services and Supports for assistance with finding resources.