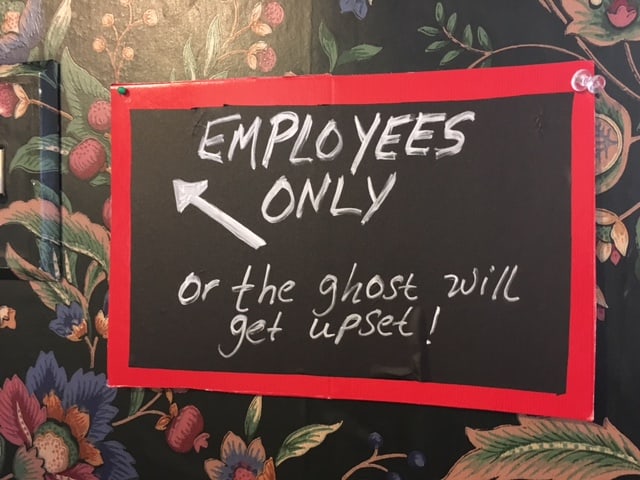 The first time I heard the footsteps was in April, a Thursday, in 2013. I remember it was Thursday because Melinda, one of our chocolatiers, didn’t normally work on Thursdays back then.

You see, Thursday is pay day.

We had very few employees before launching the factory store, just two other than me and Jim. The move to our new facility, a former residence and law office in North Creek, meant a lot of prep work if we were going to open our store on time in June. There were plenty of days when I would be the only person in the factory, and this was one of them.

What is now our store once existed as the living room of the previous owners’ home; our office at the time was the room adjacent to the store, a former bedroom. As I tended to my morning ritual of bookkeeping and sales orders, I heard the footsteps. They were all around me, upstairs and downstairs, accompanied by a banging sound. The sound resembled someone breaking apart large blocks of chocolate or moving pans. Because we weren’t running at full capacity that spring, there was no production scheduled that day. Naturally, I assumed Melinda was there to pick up her pay check. She would be stopping in momentarily to say “hi” before taking off to the bank.

The footsteps continued, as did the banging, and I continued to busy myself until she made her entrance. After several minutes of wondering why she was making such a racket pulling her check down from the bulletin board, I left the office to talk with her.

But of course, she wasn’t there. Not in the kitchen. Not in the production room. Not upstairs. I no longer heard the noises, but felt sure she was there just moments before. I peeked out at the parking lot – and saw only my car. A quick glance at the bulletin board showed her check (and our other chocolatier’s check) was still there – untouched.

That she wasn’t surprised this happened to me was disconcerting. The same scenario had played out with her several times since moving into the building. Monday was her early day – the day she showed up before 7am to begin her shift. And on more than one occasion, she heard the footsteps too. She would call my name, do a quick search, and after finding no one in the building, go back to the production room and blast Pandora. Loudly.

Purchasing the building from a local family who had occupied the house since 1947, we believed we knew all there was to know about the home that housed four children over two generations. A young couple purchased the home in 1947 and raised their family until the next generation followed suit.

However, the house was built in 1880, and property records only date back to 1947. The previous owner told us the story of the family who lived here at the turn of the century. There was a tragic accident that occurred right outside the house that resulted in the death of one of the children. Subsequently, the mother went missing and was rumored to be dead and buried under the basement of the home. Years later, the mother turned up alive and well.

As our staff grew, the noises blended into the background. I heard the banging frequently, but took less notice of it. A simple explanation might be a furnace or boiler firing up on a cold morning. And had these sounds happened in the winter – or if we actually had a furnace or a boiler and not electric heat – that would certainly have been a plausible explanation.

It seems odd that the sounds resembled a furnace firing up – as these strange occurrences didn’t stop at summertime footsteps – but continued to play out around heat sources.

We hired Jen as our chocolatier in late 2013. She and Melinda’s hours would usually complement each other’s, but rarely overlap. While we had just started hiring retail and packaging associates to keep up with our growing business, the weekdays usually consisted of the two of them at staggered shifts making chocolate.

In the summer of 2014, Melinda showed up one morning to find the room unusually warm – she felt the baseboards and realized the heat was on. The thermostat, just installed a few weeks before, was turned up to 85 degrees. She couldn’t imagine why Jen would crank the heat on a summer day, but waited for her to arrive in an effort to sort it out. The two of them were baffled. There were no other employees scheduled after Jen left the day before, and none scheduled before Melinda arrived. The obvious answer was that the dial was accidentally hit and wouldn’t happen again.

Jen recalls how many days that summer resulted in the heat being mysteriously pushed to 85 degrees. This was a new dial thermostat, unable to be programmed, so we ruled out a glitch in the technology. And it would happen after different shifts, with different people.

Could it be sabotage? Was someone sneaking into the building after everyone had gone home to wreak havoc? This was a far-fetched theory that we put to rest once we reviewed the exterior security cameras, which showed no activity after hours. So it was an obvious accident, right?

Melinda tried to recreate the circumstances that might have resulted in the dial being moved. The air compressor that sat underneath could, in theory, move the dial with vibration. So we tried it. After 4-5 minutes of running the compressor, pushed right up against the wall, we noticed something interesting. The dial didn’t move. At all. What about trays filled with chocolate accidentally banging into the thermostat or the wall? Tried and still nothing. Slamming the door? Repeated attempts did not push the dial. It was firmly clicked in the off position.

Since that summer, we have had tape firmly affixed to the dial to keep it from moving. Even in the winter, the machines heat up the room enough to keep everyone comfortable, reducing the need for another heat source. Did we really have a visitor in the building that likes it hot?

During the summer of 2015, we had our building completely re-sided, along with some other minor cosmetic changes, which required a construction crew to be with us from May to October. One morning, I arrived after the crew started work for the day. I opened the production room door to find two of the men, Matt & Billy (not their real names) standing rigid in the shipping room. They looked from me to my keys, to me, to my purse and back again. One of them peered out the window. It would be a few awkward moments before I said, “Um, hi?”

Billy spoke first, “Did you just…walk in? Like now?” I looked from my keys to my purse and out the window to my car.

It was a subtle look passed between these two coworkers, but one that led me to believe something had gone very wrong. What did they break? Worst yet, what did they find beneath the clapboards of this ridiculously old house? What aren’t they telling me?

Matt started to open his mouth to speak but it was Billy who said, “Is this place haunted?”

Ahh. “Well, that depends who you ask. What happened?”

They looked at each other again, debating whether to risk their street cred, when they told me that they arrived at dawn to get a jumpstart on the day, as they knew they’d have to leave early afternoon to go to another job site. They were collecting debris when they heard voices. They assumed I had shown up and was talking on the phone. When they walked through the shipping room adjacent to our new demo kitchen, they heard footsteps upstairs, further confirming that I or Jim had already started our work day. This went on for several minutes.

When they saw me pull into the driveway, they knew I wasn’t in the building and anything they thought they heard, had no obvious explanation.

I told them about the footsteps, the banging and the heat incidences. I told them that our daughter Sarah, who also works with us, and our other employee, Montana, had encountered similar phenomena earlier in the summer.

In response to the latest incident, Sarah downloaded a “ghost app” – yes, there really is such a thing – and she and Montana set out to hunt the ghost, one they surmised was a female. They get credit for camping out all night in the office, using their ghost app to find anomalies while taping their adventures much like an even lower budget Blair Witch Project (“There’s definitely something going on in the corner of the office by the window.”), and watching Hulu to pass the time. Other than a strange and ominous giggle they heard throughout the night (that was later tied to a Thomas the Train car whose battery was dying), they had no extraordinary encounters.

As we continue to grow and make improvements to our factory, those of us now used to our otherworldly encounters find it easy to dismiss the newcomers’ (and occasional contractors’) reports of strange noises. And, our ghost, who we have recently named Miranda, makes an easy scapegoat when machines break or an ingredient is misplaced, “Seriously? Where can a 25 pound bag of quinoa go?”

I once asked one of the men who grew up in the house back in the 50’s, if he thought it was haunted. He laughed, “Haunted? No. Absolutely not.” He answered a bit too quickly for my liking.

Today, Miranda does find new ways to make her presence known on those hot summer days. This past summer, we added three new staffers to our team. One balmy afternoon, I was standing near Alex when I felt a gust of hot air on my face. I hovered, putting my hands on all the windows to see if one had been cracked open. As expected, they were all tightly closed and locked. A quick check of the thermostat and baseboard confirmed that the heat was definitely off.

The sensation happened twice more before I finally asked, “Do you feel that?”

Alex put the chocolate she was working on aside and said, “You mean that cold blast of air?”

That’s when Emily popped into the room and said, “You felt it too?” She continued, “I thought I was going crazy this morning when hot air blew onto my face in that corner.”

But when the three of us grew silent waiting for the gust to happen again, the air in the room remained still, just as it should have been.

– From the staff at Barkeater Chocolates and Miranda – we wish you all a very spooky & warm Halloween.